Unless you live under a rock, no matter where you looked at in the past few weeks, you have probably bumped into the new Animal Crossing.

In this article, we will recreate the Animal Crossing’s World Bending effect in Unity. Trust me, you will be surprised how simple it is! But we’re not stopping there, we will also explore how we can take it to the next level...

The World Bending effect brings in the horizon and the skyline, allowing both the ground and sky to be visible at the same time.
This is done by what Nintendo calls the “Rolling Log” effect, in which the terrain seems to bend and roll beneath the players while they wander around.

The effect has an interesting origin...
The producer of Animal Crossing: Wild World, Katsuya Eguchi, previously told IGN: “For the Nintendo DS, it made more sense to use this effect in order to show the sky in the upper screen, in oppose to a scrolling camera.”

After creating a new Universal Render Pipline project, I went ahead and created a fun scene we can work with. It has a boat for the player to control.
One thing to note regarding the scene, the effect requires meshes with a sufficient amount of polygon count. If your mesh poly count is too low – it will harm the desired look.

If you need more inspiration for your scenes, Animal Crossing is not the only game using this effect. It was also featured in games like DeathSpank, Subway Surfers, and more... 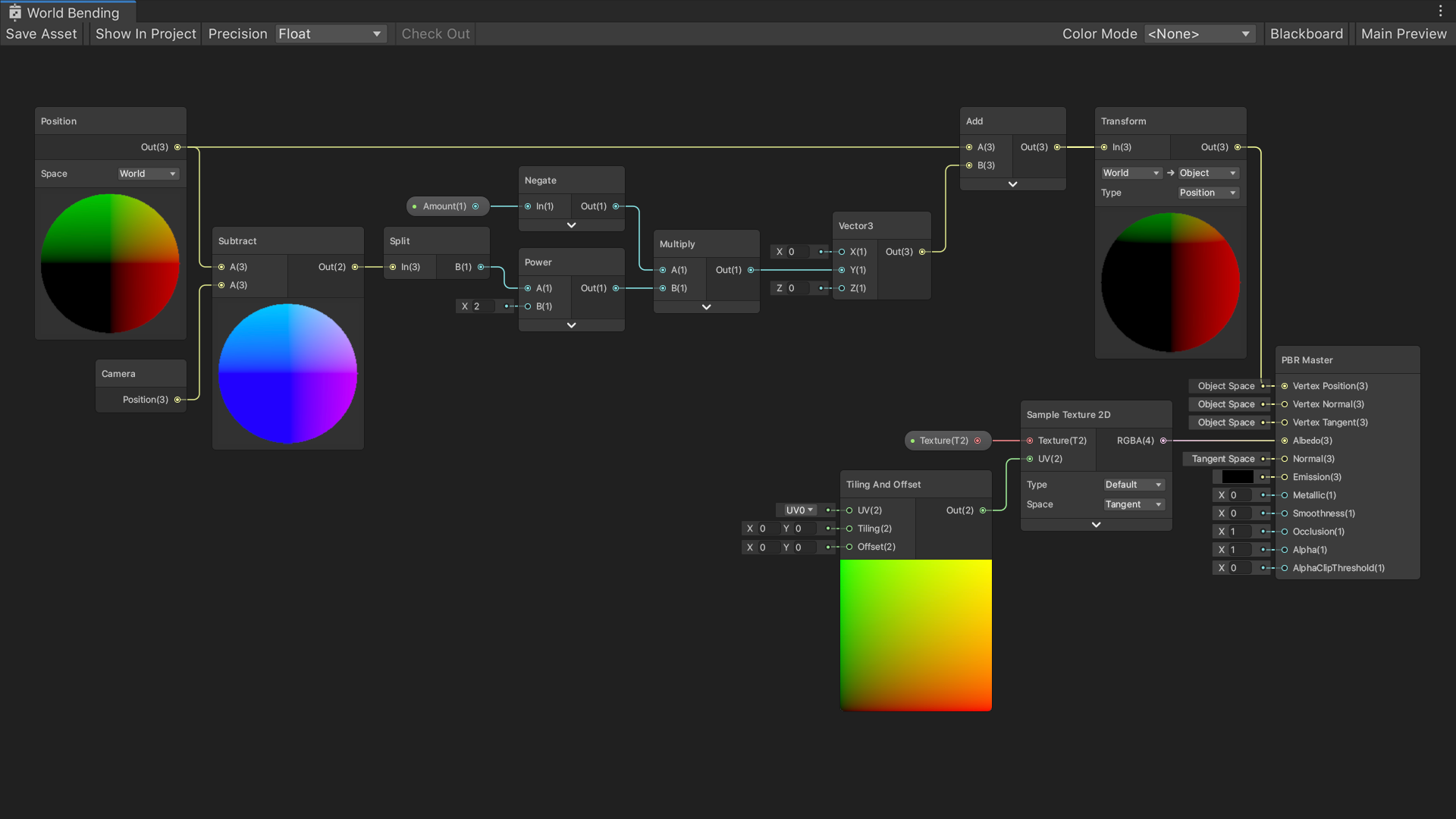 It has two properties: a Texture and a Vector1. The Amount Vector1 property expects tiny numbers, so I set it to a slider between .005 and .1.

The fundamental shader graph is now ready. Let’s see our shader in action...

An advantage of the World Bending effect is that it allows us to present only a fraction of the world at any given moment. At the same time, we aren’t actually limited to the surface area of a cylinder or a sphere – so we can create infinite large worlds.

I added a moderate amount of fog by going to Window > Rendering > Lighting Settings. In this window, I ticked Fog and set the appropriate distances for my scene.

I also added post-processing effects. Just a subtle touch of vignette and depth-of-field.

In Animal Crossing, Whenever a dialogue kicks in, the camera changes two parameters. The first one is obviously the distance, the other one is the angle.

I created a CamZone script that expects a Cinemachine virtual camera:

On my bridge object, I created a trigger collider, added the script to it, and passed in the Zoom virtual camera.

Now when the boat passes under the bridge, we have a nice zooming behavior.
If you want to learn more about Cineamchine and Camera Zones, check out my article about it.

You may have noticed as the world rolls, background objects in the distance abruptly disappear instead of rolling all the way down.
This is an issue caused by the camera’s frustum culling.

The camera’s frustum is the area of the scene that is visible to the player. The Unity renderer ignores the objects outside of the frustum. In the illustration, we see that the trees inside the frustum are highlighted and rendered.

Our shader runs on the GPU and modifies the position of the objects before rendering them.
The CPU is not aware of the modifications made on the GPU. We can see this conflict if we select an object and move it – notice how the selection outline is not synchronized with the rendered object.

Our simple solution is to render with the normal frustum, but when Unity culls are objects, we use a modified frustum.
We will create a custom orthographic frustum with a larger field of view.
Notice that the blue trees are always highlighted when inside the frustum, therefore they are always rendered when we see them.

I created a BendingManager script:

Gone are the culling issues!

By now, we have achieved the desired look & feel. But modifying the scene is, to say the least, not a pleasant experience.

In the shader graph, I added a global multi compile boolean keyword and named its reference ENABLE_BENDING.
I modified the shader, so the effect only takes place when the keyword is enabled.

I added an attribute and some more lines in top of the BendingManager script.
When it awakes, I enable and disable the keyword depending on whether we are in play mode or not.

Now when the editor is not playing, the scene is presented normally.

I modified the shader by adding a horizontal curve in addition to the depth curve. This will result in an effect that resembles a sphere in oppose to a log. 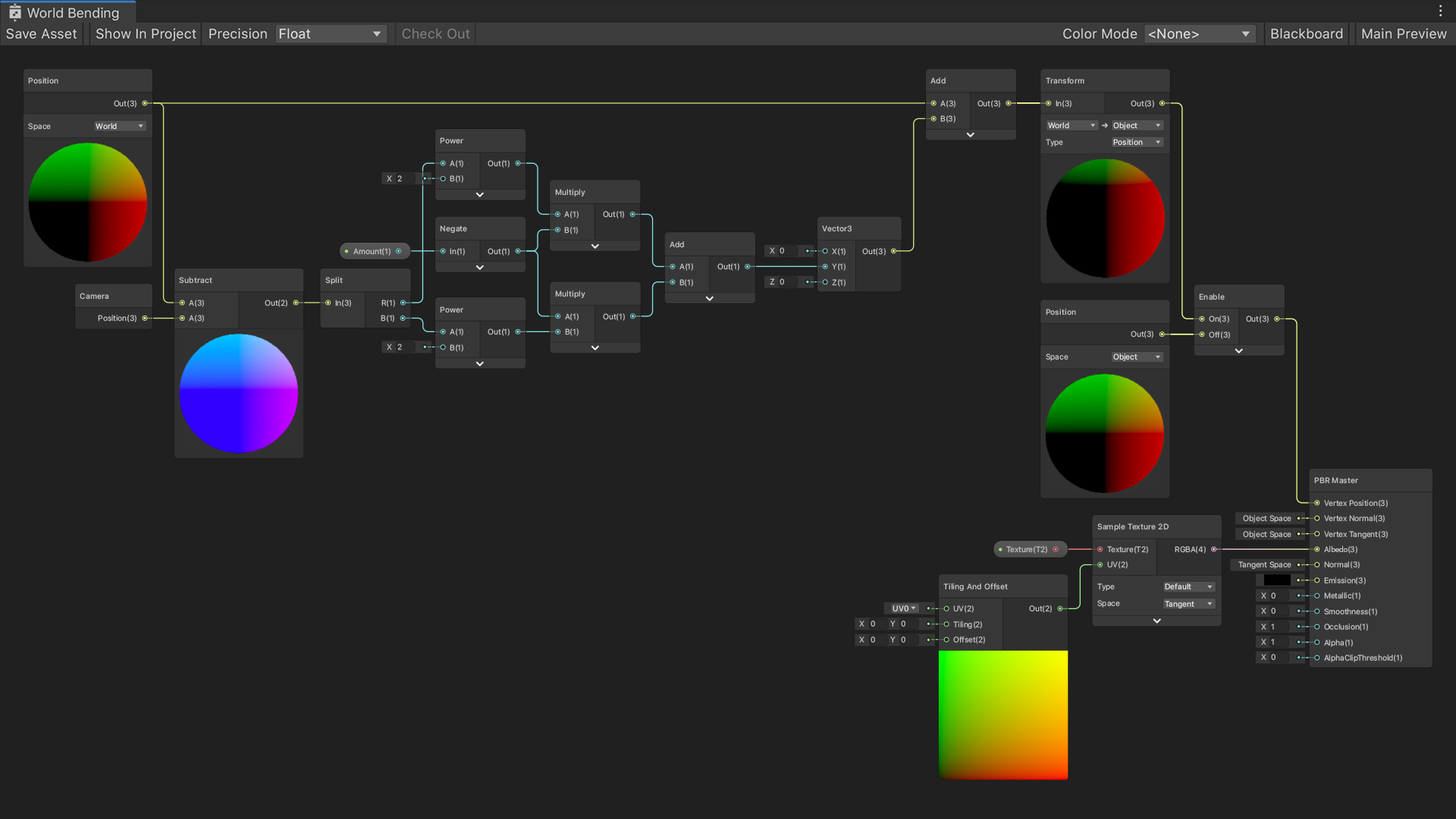 Now when we move, you can see how the world bends in both axes. It seems as we are on the edge of a planet.
Speaking of a planet... This effect has 3 parameters that we can play with to achieve a different look & feel: curvature amount, camera rotation, and camera position.
Let’s look at what happens when we change the camera rotation to 90 degrees and move it further away.

We now have a planet we can sail on.
Altering the curvature amount will change the planet’s size.

If you want to download the project we have created, you can get the Unity project from GitHub.